There is a shortage of Yanaver Esrogim this year due to a freeze in Italy. Apparently this has caught the attention of our president who seems to know that we are growing American Esrogim.

First deliveries of 1,500 etrogim arrive from African country just in time for Jewish holiday of Sukkot

The Agriculture Ministry has permitted the import of etrogim (yellow citrons) from Morocco ahead of the Jewish holiday of Sukkot.

First deliveries of 1,500 etrogim arrived in Israelseveral days ago. This is the first time the Jewish state imports etrogim from Morocco.

The Moroccan citron which grows in the Atlas Mountains is considered the original etrog from the biblical times, according to researchers specializing in the plants of the Bible.

The Moroccan citron is mostly popular among Sephardic communities, and the import is being done at the request of the communities’ leaders in Israel.

By the way, if they are really losing $1 million and they planned to export 100-200,000 lulavim, that is quite a profit they would have been making! My understanding is that the usual wholesale price to farmers is closer to $3 each than $5-$10.

Pollen reveals ancient palace grew the citrus in its garden.

The earliest evidence of local cultivation of three of the Sukkot holiday’s traditional “four species” has been found at the most ancient royal royal garden ever discovered in Israel.

The garden, at Kibbutz Ramat Rachel in Jerusalem, gave up its secrets through remnants of pollen found in the plaster of its walls.

The garden was part of an Israelite palace at Ramat Rachel that has been excavated for many years, most recently in a joint dig by Prof. Oded Lipschits and Dr. Yuval Gadot of Tel Aviv University and Prof. Manfred Oeming of Heidelberg University. The palace existed from the time of King Hezekiah until the Hasmonean period in the second century B.C.E.

The excavations revealed that the garden must have had a beautiful – and strategic – view, but it lacked its own water source. Thus the ancient landscape architects had to build channels and pools to collect rainwater for irrigation.

The archaeologists discovered that the garden’s designers had removed the original hard soil and replaced it with suitable garden soil. But until recently, they had no idea what was grown there.

Then, Lipschits said, he and his colleagues had a “wild thought”: If plasterers had worked on the garden walls in springtime, when flowers were blooming, breezes would have carried the pollen to the walls, where it would have become embedded in the plaster.

Enlisting the aid of Tel Aviv University archaeobotanist Dr. Daphne Langot, they carefully peeled away layers of the plaster, revealing pollen from a number of plant species.

Most of the plants were wild, but in one layer of plaster, apparently from the Persian period (the era of the Jewish return from the Babylonian exile in 538 B.C.E. ) they found pollen from ornamental species and fruit trees, some of which came from distant lands.

The find that most excited the scholars was pollen from etrogs, or citrons, a fruit that originated in India. This is the earliest botanical evidence of citrons in the country.

Scholars believe the citron came here via Persia, and that its Hebrew name, etrog, preserves the Persian name for the fruit – turung. They also say royal cultivation of the exotic newcomer was a means of advertising the king’s power and capabilities.

The garden at Ramat Rachel is also the first place in the country to yield evidence of the cultivation of myrtle and willow – two more of the four species used in Sukkot rituals.

It is well-known that Rav Michel Yehudah Lefkowitz zt”l, rosh yeshiva of Yeshivas Ponovezh L’tzeirim, who was niftar this summer, was given seeds of an esrog by the Chazon Ish to plant to produce esrogim that are pure and are under no suspicion of being murkav, grafted.  The Chazon Ish had approached him with an esrog that he said was definitely kosher and was not grafted. The Chazon Ish actually asked Rav Michel Yehudah to plant the esrog seeds in his yard and told him that he would have parnassah from it.

The Chazon Ish replied that all he would have to do was plant the esrog and water it. The Chazon Ish promised him that it would not take up much of his time. 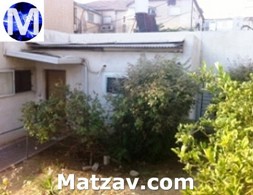 Remarkably, that esrog tree grew into the famous “Lefkowitz-Chazon Ish Esrogim.” Rav Michel Yehudah barely had to invest any time into it, despite the fact that an esrog tree is usually very sensitive, requires much attention, and does not last for many years. 70 years later, that tree stood tall in Rav Michel Yehudah’s yard and was still producing beautiful esrogim.

However, this month, news emerged from Bnei Brak that the historic tree has died. Since the time of Rav Michel Yehudah’s petirah, the tree’s branches have gradually been getting dried out, and, at the present time, the tree is all but dead. The fruit have fallen off and the branches have dried out.

Upon learning of the news, the Toldos Aharon Rebbe, who is makpid each Sukkos to make a bracha on an esrog from Rav Michel Yehudah’s yard, sent chassidim to confirm the report. They indeed found that the tree has withered.

While the general story of the Chazon Ish’s esrog tree is well-known, there are some lesser known facts and stories about the tree:

Rav Michel Yehudah said that when he asked the Chazon Ish what din the esrog had, the Chazon Ish responded that “it has a din of masores” [tradition, just as if the subject esrog had been handed down from generation to generation].

The Chazon Ish constantly inquired after the welfare of the tree, asking Rav Michel Yehudah if he was watering it enough, etc. His grandson related that during the second year of the tree’s life, it looked like it would fail. Rav Michel Yehudah reported this to the Chazon Ish and the Chazon Ish told him not to worry. “If the Ribbono Shel Olam desires it,” said the Chazon Ish, “He can make a wind come that will revive the tree [and make it live for many years].” There was an immediate improvement and, as is well known, the tree lived more than 60 years after its planting, despite generally short life spans for esrog trees.

The Steipler Gaon did this all his life, selecting his esrog (and one for his daughter, Rebbetzin Barzam) on the 15th of Av. The Steipler would inquire throughout the year as to the status of tree. Interestingly, during the last year of his life, he did not inquire as to the status of the tree; the Steipler ultimately passed away on the 23rd of Av and was too ill that year to have chosen his esrog on the 15th of Av.

Until this year, each Sukkos, Rav Chaim Kanievsky made his bracha only over an esrog from this tree, regardless of whether another esrog might be cleaner.

As is well-known, Rav Michel Yehudah gave anyone the right to cultivate the seeds and start an orchard from his tree, with no request for compensation.

And now, with the tree having died, those who are makpid to obtain “Lefkowitz esrogim” will have to look for a tree planted with seeds from the original tree.

The following was posted on the following site on August 8 2011: www.almasryalyoum.com/en/node/488873

Egypt’s Agriculture Ministry has announced a ban on the export of palm leaves to Israel starting this year and for the coming two years, a decision that some news reports have linked with recent violence along the Egyptian border with Israel in the past week.

Tensions have been high between the Israeli and Egyptian governments this past week after Israeli military units crossed into Egyptian territory while pursuing alleged terrorists along the border. Six Egyptian police and army personnel were killed by Israeli fire.

The decision to ban the sale of Egyptian palm leaves to Israel has been hailed as an act of defiance on the part of the minister of agriculture, Salah Youssef. However, the minster’s decision is not aimed entirely at Israel, but includes a ban on harvesting and exporting palm leaves and hearts nationwide, and reflects growing concern at the poor state of Egypt’s population of palm trees, which is under pressure from over-harvesting and disease.

In announcing the decision to ban exports to Isreal during a press conference on Sunday, Youssef made mention of the need to preserve Egypt’s wealth of palm trees, which are considered an Egyptian national treasure and which have come under attack from a parasite called the Red Palm Weevil.

Youssef said he reached the decision after reading ministry reports stating the need to preserve palm trees by bringing an end to the cutting of palm leaves and branches clustered around the top of the trunk.

The need to protect the trees has been highlighted before but never enacted, most recently on 26 July this year, when the governor of North Sinai called for a ban on exports to Israel.

Israelis use the palm leaves in the ritual celebration of a Jewish holiday known as the Feast of Tabernacles.

The Israeli Maariv daily reported recently that the regime of ousted President Hosni Mubarak allowed the Israelis to buy large quantities of palm branches, but that the Egyptian revolution might mean the end of exports.