Other than meeting certain shape and minimum size requirements, lulavim are not generally graded by length or girth.

The lulav is the unopened frond or “palm spear” that grows from the top of the palm tree. All palm trees (and also grasses) have at least one lulav. Each lulav leaf has two parts which will eventually open up and fan out to form the palm branch that can be used to provide a cooling breeze. As the tree grows, the lulavim open out and splay outwards, making room for fresh lulavim that are at the top of the tree as it grows upwards.

We mostly grade lulavim based on how closed or open the middle leaf is. Some lulavim are more slender than others. When they grow they can be six feet or longer. For practical purposes we need to be able to ship them both in bulk and also to individual customers.

We receive lulavim which are between about 36-42″ long. Sometimes we need to trim them from the bottom to be able to fit them into our shipping boxes. This will result in the outer most leaves falling away, but this is of no halachic relevance, since we are concerned with the middle leaf. The result of this is that you may receive a slender lulav, but hopefully one whose middle leaf is more closed.

Other than the above physical requirements a lulav must come from a palm tree that produces edible dates. There are many varieties of dates and lulavim from the “Deglet Noor” variety often have middle leaves that split easily. The Medjool date palm produces excellent lulavim, and those are the ones we supply most of the time. The “Deri” (Dayri) date palm produces spectacular lulavim whose middle leaves are closed and stay closed. We do supply these also, but they are expensive.

For a more comprehensive discussion of the kashrus of a lulav (as well as the other species) I recommend three books:

1. What makes a kosher esrog?

Before we even look at an esrog we need to know first that:
– it was not grown from a tree (or be descended from a tree) that was grafted. Grafting means that a branch from one tree (say an esrog), is inserted into the trunk of another one (e.g. a lemon). Even grafting an esrog to an esrog could be problematic.
– it must not be stolen.
– the various agricultural mitzvos are upheld such as the restriction of fruit in the third and fourth year of the tree’s growth, as well as (if in Israel) the separation of tithes and the observance of the sabbatical (shemittah) year.
– it is a certain minimum size. According to most opinions this is 100g, although other hold that even 58g is acceptable. There is no maximum size. Esrogim can grow to many pounds.
– the esrog has a reliable pedigree (yichus) and has been obtained from a reliable source.
– there are no parts of the esrog that are missing, for example a piece of skin, the stalk or the pitam has broken off after picking (see below).
– there are no disqualifying blemishes such as black spots in the upper part of the esrog.
– the esrog is an acceptable color. Very dark green is not acceptable.
– the esrog must be edible (if pesticides have been used to the point that the esrog is inedible, this is a problem – see below).
For a more comprehensive discussion of the kashrus of an esrog (as well as the other species) I recommend three books:
Halachos of the Four Species by Rabbi Yechiel Michel Stern (Feldheim)
The Lulav and Esrog Handbook by Rabbi Hadar Margolin (ArtScroll)

2. What if the pitam is missing?

It is a common misconception that the esrog must have a pitam. All fruit start off with a pitam. It is what remains of the female part of the flower.  Once the flower has been fertilized in almost all fruit, the pitam withers, dies, falls off, usually leaving a brown scar. In many esrogim, the pitam does not wither but remains. If the pitam withered naturally, then the esrog is perfectly kosher, according to almost all opinions. If however it was removed because of damage just before, or after picking then according to everyone the esrog is pasul (invalid). It is possible to distinguish between the two circumstances.

Having a pitam is considered by many a hiddur (beautification), or a necessity borne from a tradition. Many people prefer that the esrog does not have a pitam to avoid the problem of it being damaged. Most of our Orthodox customers prefer to have an esrog without a pitam. We prefer to ship pitamless esrogim to avoid the chance of a broken pitam arriving just before yom tov and having little ability to replace it in time.

Because there is a demand for esrogim with pitams, commercial farms actually spray the fruit when it is just forming with a special plant hormone that results in the pitam staying on the esrog.

Other than meeting minimum size and color requirements, esrogim are not graded or priced based on size or color.  Many people prefer smaller citrons as they are easier to hold during Hallel and while making the hoshanos circuits around the synagogue throughout the seven days of succos (excluding shabbos).
A somewhat green, green-yellow or yellow esrog is preferred. Some people like one that is slightly green as a more yellow (particularly a very golden yellow) is more likely to discolor after much handling. If the esrog is too green for you, you can place it in a brown paper bag with one or two yellow or red apples which emit a gas that cause the esrog to ripen and turn more yellow.
We do not grade esrogim for aroma as it has no halachic significance. The riper the esrog (i.e. the more yellow or golden yellow), the more aromatic it will be. If all you want is an esrog to decorate the succah table and emit a nice fragrance, but will not use for the mitzvah, we usually have some nice large, yellow (and less expensive!) esrogim that you can use for this purpose or to make jam or schnapps.
Much like diamonds, what governs the grade and value of the esrog is the number, size, type and position of blemishes, beyond any that invalidate an esrog.  We do encounter large, yellow, esrogim with pitams but they have so many blemishes that they are graded lower than smaller, non-pitamed esrogim that are “cleaner” and not nearly as good in quality as those we have supplied to our customers for about 18 years.
We use etrogim from suppliers with whom we have long standing relationships and whom we know to supply high quality etrogim that well meet the standards of our Ultra-Orthodox, Orthodox, Conservative and Reform customers.
Our experience is that our grading is typically one to two grades higher than other sellers on a price-to-price basis, meaning that the grade we sell at a certain price would cost $20-30 more elsewhere. The sets that sell elsewhere for about $50 are often kosher but on a post-facto basis, meaning that they often rely on leniencies relating to judging borderline types of blemishes. We would sell those sets for a child under the age of 12/13, as they are permitted to recite a blessing over such an etrog. An adult should not if there is better fruit available.
All the etrogim we send out are checked for kashrut and quality.

4. Why is a blemish-free esrog important?

There are many reasons for wanting an esrog with as few blemishes as possible. One is that we want to beautify the mitzvah of lulav and esrog. Another reason is that by seeking a less-blemished citron, having just emerged from Yom Kippur, we wish to show how blemish-free we wish our neshamat (souls) to remain/ become.

There is a shortage of Yanaver Esrogim this year due to a freeze in Italy. Apparently this has caught the attention of our president who seems to know that we are growing American Esrogim. 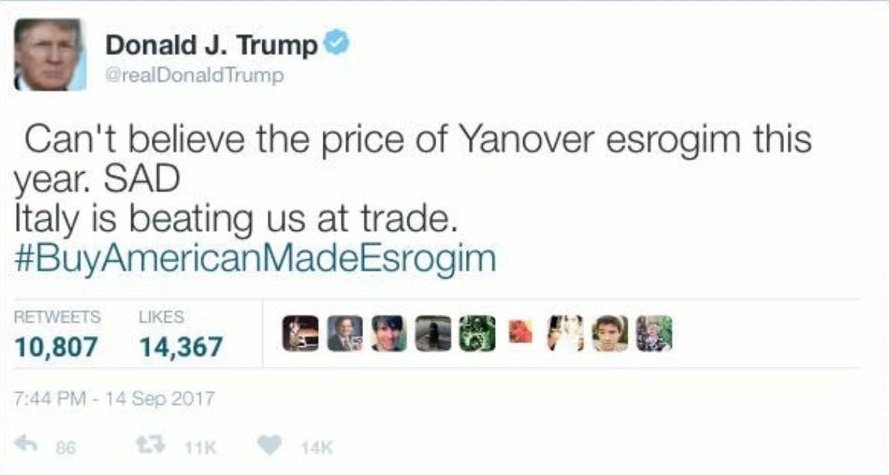 Is the brown covering on a lulav normal? Is there something wrong with my lulav?

What customers are describing is a paper thin, brown, flaky covering that is most often seen on the back (non-smooth) side of the lulav and sometimes covers the entire tip. On some lulavim you can see this brown color in between the leaflets on the “smooth” side of the lulav. 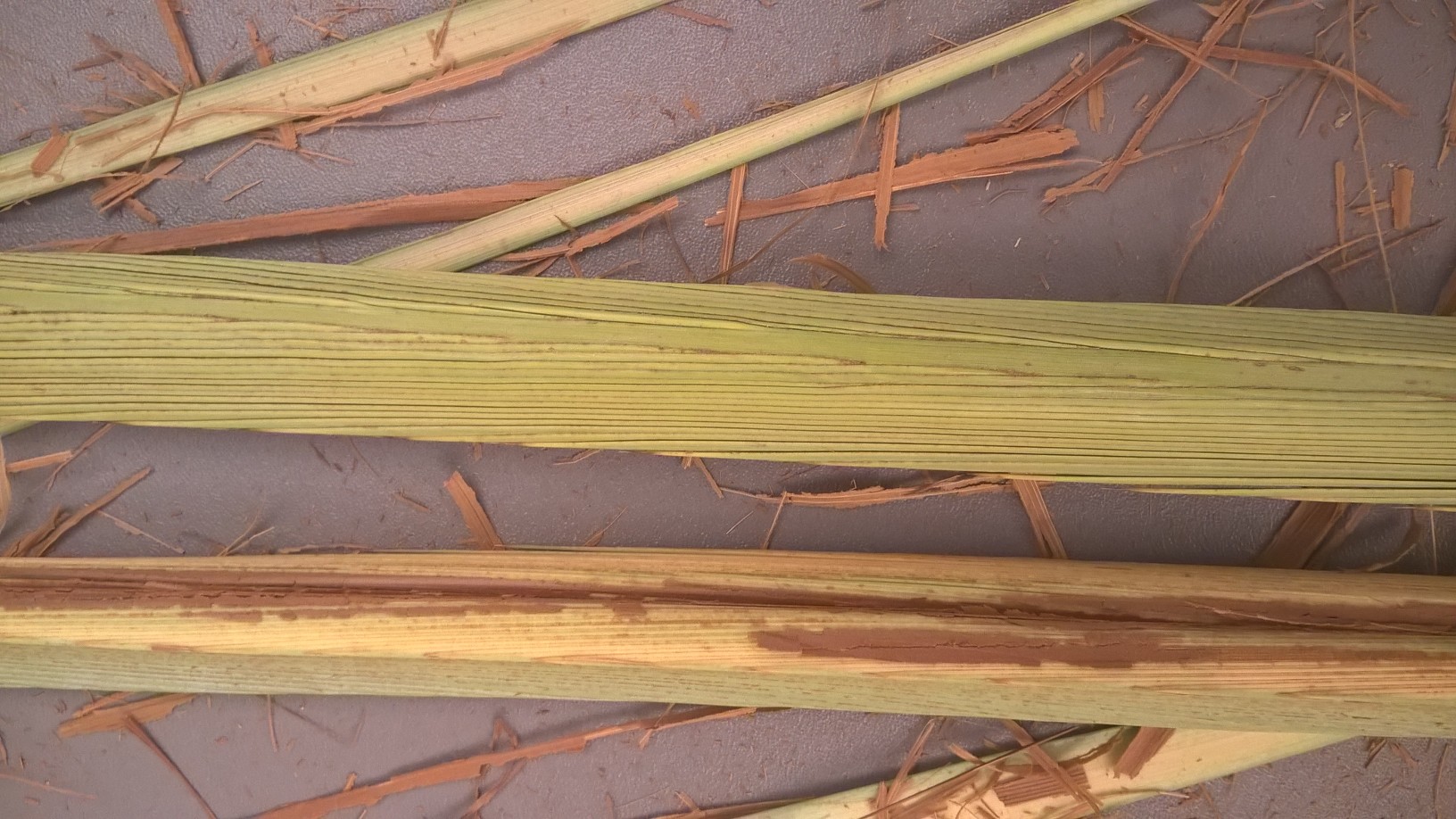 This is called “moch”and is perfectly normal and nothing to worry about Think of it as the “baby hair” of the lulav. It is a sign that the lulav is pretty fresh. For some people, the moch is highly desirable.

Do watch out however for signs of mold. These are black patches that may develop between the leaves, especially if the lulav is stored in a place that is too warm and moist. If you do see a few small patches, you can remove it with a cloth dipped in dilute bleach. Keep an eye on it to make sure it does not spread. 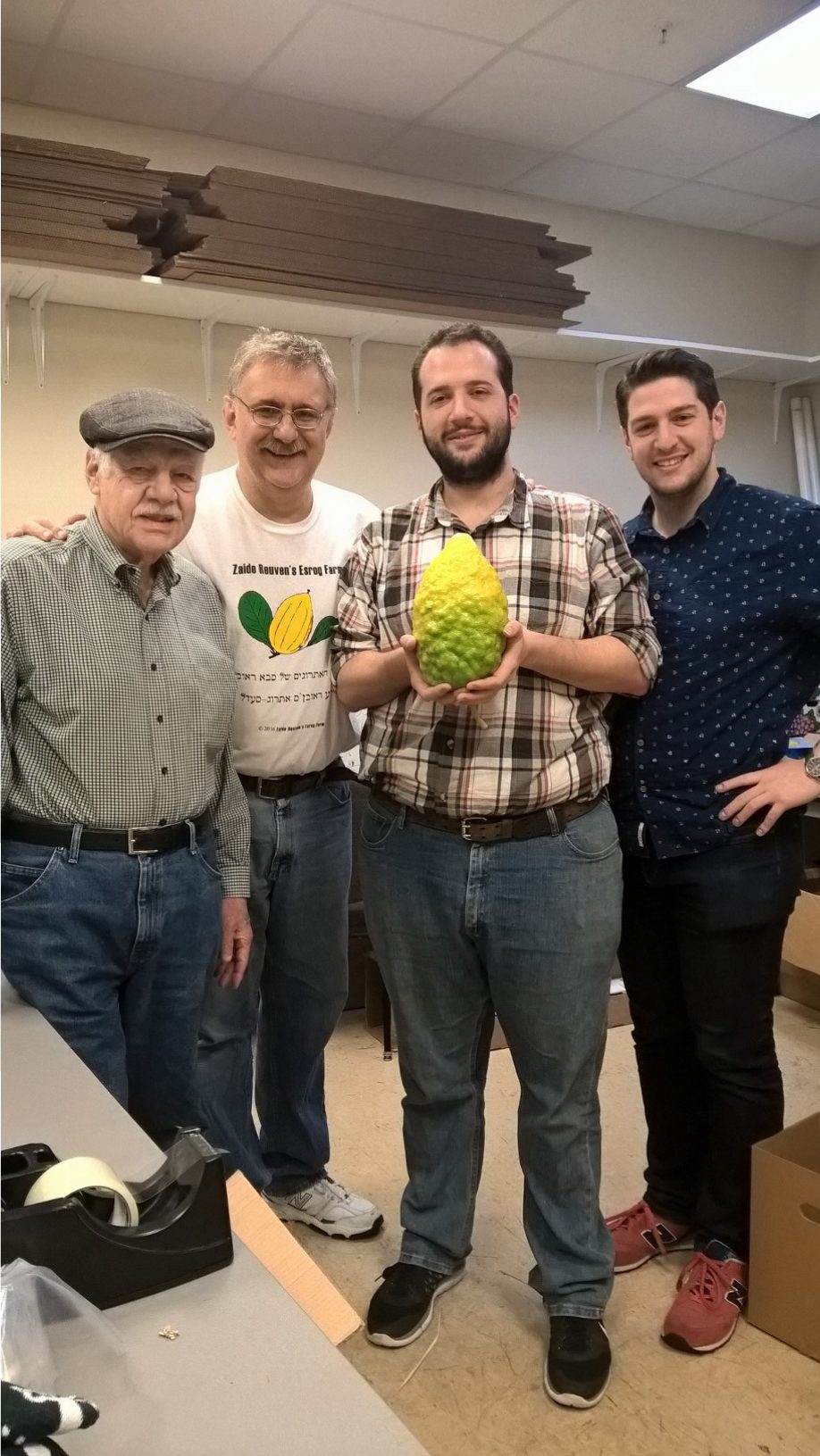 Henry Litoff was my first employee when I started Zaide Reuven’s Esrog Farm about 20 years ago when I started growing esrog trees. Here he is pictured with his father and brother and the 5.5 lb esrog he grew from the seeds of one of our first esrogim we sold. He managed to do this in Dallas using his own greenhouse. 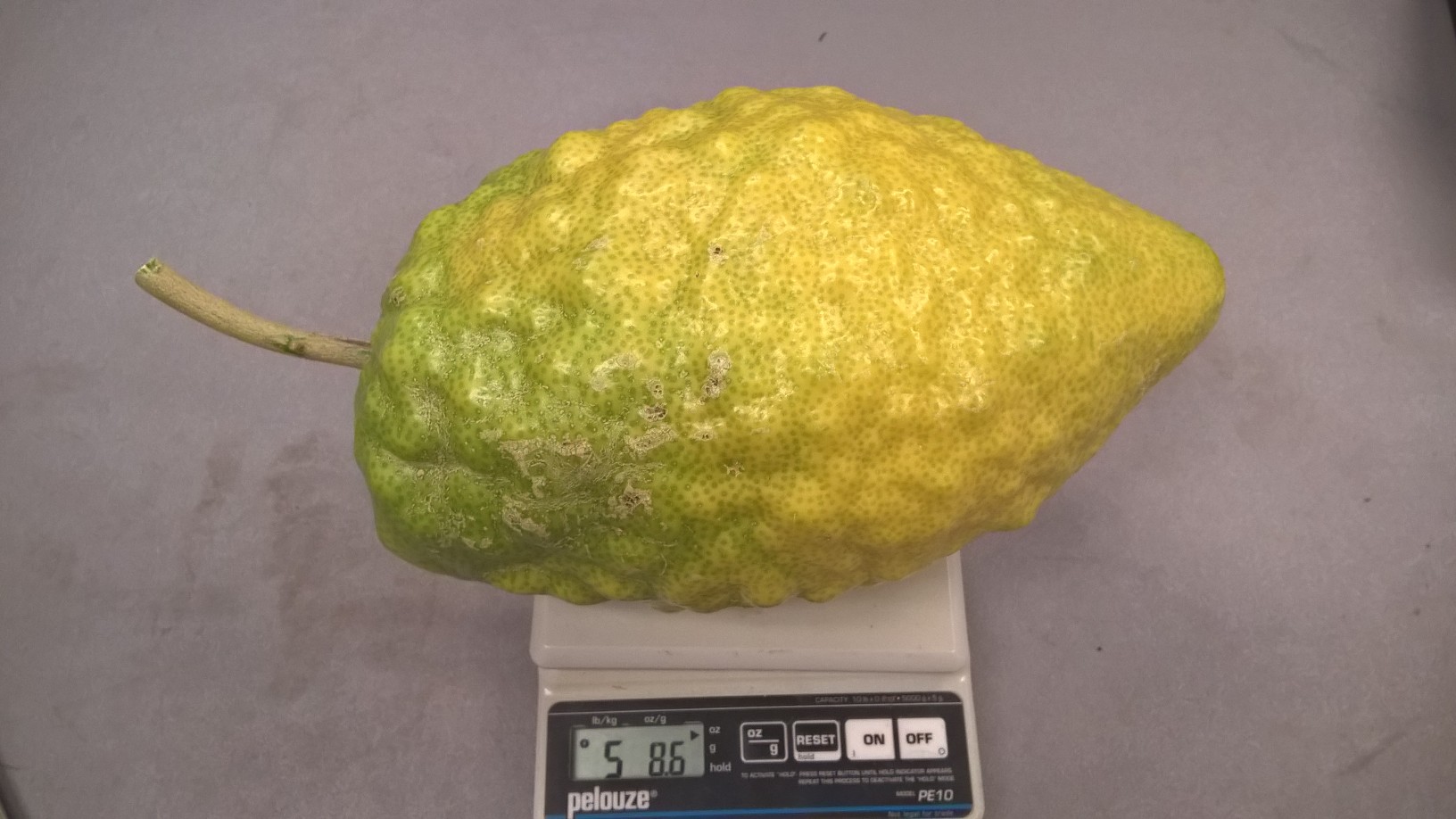 First deliveries of 1,500 etrogim arrive from African country just in time for Jewish holiday of Sukkot

The Agriculture Ministry has permitted the import of etrogim (yellow citrons) from Morocco ahead of the Jewish holiday of Sukkot.

First deliveries of 1,500 etrogim arrived in Israelseveral days ago. This is the first time the Jewish state imports etrogim from Morocco.

The Moroccan citron which grows in the Atlas Mountains is considered the original etrog from the biblical times, according to researchers specializing in the plants of the Bible.

The Moroccan citron is mostly popular among Sephardic communities, and the import is being done at the request of the communities’ leaders in Israel.